While traipsing around the back country in Michoacán the other day we stumbled across a Pueblo Magico called Cuitzeo. It is on the far side of Lake Cuitzeo which is that large shallow lake you see off to the left when you are driving to Morelia. I'm not sure what made it a Pueblo Magico but it is. Mr. Google says it was founded in 1550 but not much else. 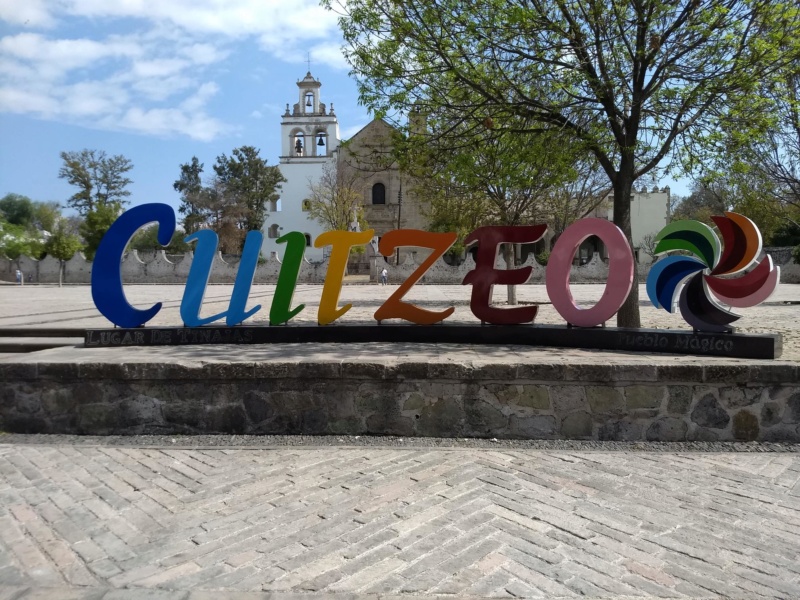 The church and convent are beautiful with frescoes that are still visible. And it's so clean!

Yes, it was very clean and primarily painted all white and terra like Mazamitla and Tapalpa.
_________________
Vacation Rentals
https://casadecomo.webs.com/

Always said it was one the cleanest towns in Mexico, never could even see a piece of paper when driving through.
The residents and businesses are a little standoffish, even with out of town Mexicans, and I suppose the foreign visitors as well.

Yeah it didn't seem too touristy. In fact further on we got stopped by the Michoacan State Policia. They said there was a report of strangers driving around.....lol. We were 3 gringos and a Mexican in a Mercedes SUV with a bunch of testing equipment, GPS units, walkie takies, etc. We had some splainin to do as they told us to get out of the vehicle so they could search but at the end they told us to carry on. I found it strange that they didn't even ask us what we were doing in the area.
_________________
Vacation Rentals
https://casadecomo.webs.com/

What were you doing in the area?

It is kind of stuck in the past and it is nice to stay a couple of hours there and move on... The reason for the architecture goes right back to Spain and the Basque country in france and many of the early town in Mexico were that way.. white was done with lime and the walls were whitewashed every spring and the red came from the earth and was done that way so the dirt did not stain the white so fast as animals and carts would go by.. When I was a kid staying with my grand- parents in the French Basque country that was the way all the houses where  white and red and it was the same on the Spanish side but iit was not as clean and they would skip a few springs before they redid the walls. Chiapas San Cristobal was that way too. Some of the towns in the Patzcuaro area or in the mountains around in Mexico are right out of the country in Spain ..

Yeah, it´s the land of that famous Mexican look....."who are you and what are doing here look"

If you are going from Morelia to SMA or any of the cities in GTO, that bridge across Lake Cuitzeo is a pretty direct route.

Actually, I didn´t find them stuck in the past…...pretty modern with internet, sat. tv, and up to date on everything.

I was speaking of the architecture and the stores not of the internet which is just about everywhere in Mexico and more accessible that it is in Europe..

The road is great and that is going to be my way to go to the Arco Norte..

slainte39 wrote:Yeah, it´s the land of that famous Mexican look....."who are you and what are doing here look"

Mexicans may do it best, but you can get the look in just about any small town, anywhere, when you're an obvious stranger.

First time I drove into Mezcala about 2005 there were daggers in the air. Of course, they had the reputation of not liking even Mexican strangers in their town. Now they see the advantage of strangers with money and assistance.

I don't find Mezcala to be any more welcoming today than it was 10 years ago. In fact I stopped going there as the place gives me the creeps. Somethings not right there says my gut......
_________________
Vacation Rentals
https://casadecomo.webs.com/

I am sorry to hear that about Mezcala. They have always been standoffish in my experience, but I have enjoyed going there and was planning to go so again. It is so important historically--the natives took refuge on Mezcala Island and warded off the Spanish who never conquered it, so I understand. About 5 years ago I took my Wilkes ESL students there--we caravaned over and met up with a guide who had arranged boats to take us to the island. I no longer have contact info for the guide, as I think he retired.

If I were to visit the island again I would charter a boat in Chapala to take me there and bypass Mezcala.
_________________
Vacation Rentals
https://casadecomo.webs.com/

CanuckBob wrote:I don't find Mezcala to be any more welcoming today than it was 10 years ago. In fact I stopped going there as the place gives me the creeps. Somethings not right there says  my gut......

I can understand your feelings; I felt the same way. They are getting a great deal of help from gringos in our area as well as outreach from churches. I wonder if the folks who go out there regularly feel uncomfortable.

I feel the same way about Mezcala and rarely go there. Felt uncomfortable in San Juan Cosalá when I first got here too, but not anymore.

It's ok with me.  I understand how they feel and I think it is valid.

Most indigenous towns are not very friendly at first..It is the same here in Chiapas. People do not trust or care for strangers  and people are shy but once the ice is broken , it usually is ok.. Since these towns do not have a whole lot to offer , people wonder why you go there..
I once took a shortcut via the dirt road between Poncitlan and San Pedro, the town past Mezcala. I blew a tire the minute I got to San Pedro and that was on the scary side but the men there were very helpful and all they accepted was coca cola..helped me with the tires and were ok  after they got over their surprise to see two French women with a weird jack...They could not figure out the jack more than we coud , the jack they found broke down so they jacked up the car with stone and the strength of a bunch of men.. We were relieved to leave before dark as although the people helped us, we were not that eager to stick around..

slainte39 wrote:Yeah, it´s the land of that famous Mexican look....."who are you and what are doing here look"

Mexicans may do it best, but you can get the look in just about any small town, anywhere, when you're an obvious stranger.

My compadre has parientes there, so that helped a bit on acceptance, but you still get the....."so you´re here, now what?" look.

Foreigners and out of town Mexicans barely get a head turn or second look in most of the villages and towns around the lake except for the few like Mezcala.

Rented a car and drove that rode to the end (I thought it would keep on going along the lakeshore) in 2011. Went down to the dock in Mezcala and experienced the boat touts. The town felt weird but I had water and snacks. The further east I got before the turnaround my antenna started twitching more and more. About half way back got stopped by a state police patrol pick up heading east. you know the guys with masks and serious firearms standing in the bed. The driver looked at me pointed towards Chapala and did the up and down fist thing with the "are you fucking nuts" look. Got some great images but knew that east of Mezcala I was out of my depth completely.