hi , a few weeks ago i posted that i had a problem with my galaxy tab. to cut a long story short i took it to computerland in riberas who have since taken it to samsung in guadalajara. samsung are saying that because it was purchased outside of mexico the part that is required isnt available here !! i find that very strange to say the least.
it is out of warranty and was purchased in panama, anyone got any ideas what more i can do ??
this is not any fault of computerland who have been very helpful..

Perhaps Samsung doesn't have anyone here trained to do those repairs. There are very few parts inside a tablet, I mean VERY few parts, and repairs to the motherboard would be impossible outside of a factory-authorized joint. This here is a Samsung Galaxy. 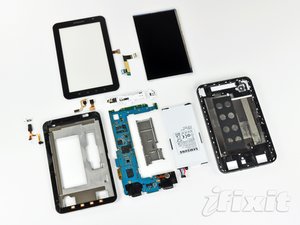 hi thanks for the info.i am quite prepared for them to replace the mother board and pay, but so far neither the three pc shops ive been to nor samsung in guad. seem to be able to do it or in samsungs case get the part.. very weird.

Like I said, if not authorized to make those specific repairs, too dangerous for them to try. Imagine the fallout when it doesn't work.

apparently it was the authorized dealer in guad. surely it cant be that difficult to replace the motherboard. dont think i will buy another samsung after this farce.

No, what I mean is the dealers are not always authorized to make all repairs. Even Apple has this problem, depending where you are. And because the things are made in Korea, by other companies, and then marked with their brand, the ability to set things up can be difficult.

I would take it in to the Plaza Technologia on 16th Septiembre in the Historic Centre of Guadalajara.

The BEST place to get repairs.

update.. its still not fixed , spoke with customer support in usa, as apparently was made for america and panama , they just referred me to panama !! told them would be expensive to send it there and back without any guarantee of getting it fixed. then they hung up on me..so much for worldwide service, no more samsung for me and learnt not to buy anything from another country.

That's nasty, and if their support managers knew, they might fire the guy. Perhaps another call will get better results.

This is sad to hear, because Samsung (IMHO) is right up where Sony used to be years ago in terms of quality and service.

yes i agree their stuff is normally great, but this has really put a downer on it. dont know what more i can do. very disappointing.

still got problems, helper guy can you carry out this work for me ? or suggest someone.
was taken fron xdf website you suggested. i have no idea what they are suggesting. but think it will be my last resort...
Re: [GT-P7500] Won't BOOTUP at all! Even after flashing Firmware through ODIN
On a lot of samsung devices, you have to uncheck auto reboot, and take the battery out after its done flashing. This has something to do with Samsung's security. Is there any way to do this on a galaxy tab? If so it might make it work. If not, you could try holding the power button after its done flashing (with auto reboot unchecked) until it forces a shutdown. If that doesn't work, you could try and let it run out of battery after its done flashing.